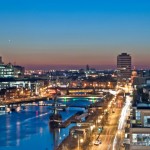 In 2012 the most powerful man in the world, US president Barack obama, fell victim to cybersquatting/ domain squatting. Before the Presidents advisors could announce that they would be turning the remainder of reelection campaign funds into a new nonprofit, Organising for Action, savvy cybersquatters saw the great financial potential in securing the domain name first. They claimed organisingforaction.com and organisingforaction.org beating the president to the punch!

One of the worlds most lucrative banks, Bank of America was involved in a high profile case of cybersquatting when opportunistic domain squatters saw the potential in strategically buying domain names for possible future bank mergers and subsequently selling them on eBay.The domains for sale included bankofamericamerrilllynch.com and bofaml.com.

Global giant, Youtube was targeted by typo-squatters in a highly publicised corporate typo-squatting case. The domain name yuube.com was bought with the sole purpose of targeting YouTube users, anticipating that a large amount of YouTube traffic would mis-spell the domain name. When a user accidentally typed yuube.com they would be redirected to a malicious website or page.

A high profile case of phishing occurred when fraudulent emails purportedly from Global corporation, American Express were sent to an unknown number of recipients. A simple DNS change could have been made to thwart this spoofed email, but American Express failed to make any changes.

Burger King fell victim to a bad case of brand-jacking when the company’s logo was hi-jacked and replaced with an advertisement of it’s main competitor, McDonalds. Promptly after this, a fraudulent ‘news’ story followed purporting that Burger King had been sold to its rival Mc Donalds as a result of persistent drug use of its employees. The hack lasted for approximately an hour until the twitter account was suspended.

This website uses cookies to improve your experience while you navigate through the website. Out of these, the cookies that are categorized as necessary are stored on your browser as they are essential for the working of basic functionalities of the website. We also use third-party cookies that help us analyze and understand how you use this website. These cookies will be stored in your browser only with your consent. You also have the option to opt-out of these cookies. But opting out of some of these cookies may affect your browsing experience.
Necessary Always Enabled
Necessary cookies are absolutely essential for the website to function properly. These cookies ensure basic functionalities and security features of the website, anonymously.
Functional
Functional cookies help to perform certain functionalities like sharing the content of the website on social media platforms, collect feedbacks, and other third-party features.
Performance
Performance cookies are used to understand and analyze the key performance indexes of the website which helps in delivering a better user experience for the visitors.
Analytics
Analytical cookies are used to understand how visitors interact with the website. These cookies help provide information on metrics the number of visitors, bounce rate, traffic source, etc.
Advertisement
Advertisement cookies are used to provide visitors with relevant ads and marketing campaigns. These cookies track visitors across websites and collect information to provide customized ads.
Others
Other uncategorized cookies are those that are being analyzed and have not been classified into a category as yet.
SAVE & ACCEPT
Powered by